This year, 2015, is an apt moment to remember an important exhibition, first seen 60 years ago, and still going…

The book of the show.

Recently, I have been reading John Williams, the Sydney photographer and critic. Like him, and many photographers of my generation and older, I was first inspired by the Family of Man exhibition. As you may know, for Edward Steichen, this Museum of Modern Art exhibition represented the “culmination of his career”; the exhibition was an extraordinary feat, containing 503 photos from 68 countries which represented 273 photographers (163 Americans and 70 European photographers constituting the majority) selected from almost 2 million pictures submitted by famous and unknown photographers. After its initial showing at The Museum of Modern Art in 1955 from January 24 to May 8 in New York, the exhibition toured the world for eight years, making stops in thirty-seven countries on six continents.

More than 9 million people viewed the exhibit which most believe is still the record for a photography show. Now archived and displayed at Clervaux Castle in Luxembourg, the country in which Edward Steichen was born, in 1879, in Bivange, the show also lives on in book form which has sold over 4 million copies.

I never saw the exhibition itself; I was 4 years old and living in London in 1955, and still there when the show came to Melbourne to be shown I believe, from scant reference, in a car showroom, and in Sydney at David Jones, where John Williams encountered it. So my experience is of the book, which sat on our shelf alongside another, also formative for me. ‘The World Is Young’ connects to ‘The Family’ through its authors, Wayne and Joan Miller, who helped Steichen wittle away
at the pile of 2 million photographs selecting for his exhibition. Incidentally, the Millers feature in Steichen’s show. ‘The World is Young’ represents an application of the post-war American optimism that inspires ‘The Family of Man’ to the Millers’ own family in an exercise to which Wayne Miller devoted a year photographing his own family of four children growing up at home and going to school in California. As a 13 year old, after being handed down my father’s Nikon S3 rangefinder camera, and in imitation of the Millers, it  became my goal to document the children of my neighbourhood in the same way, but my teenage shyness meant the project was intermittent, then short-lived. That is why I pored through these two books in awe at the sheer adventure of photography. 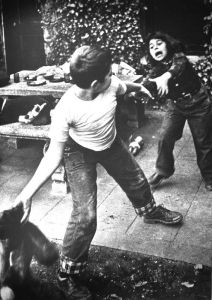 Not so sweet…W. Eugene Smith image from ‘The Family of Man’

The Family of Man has had, I believe, an unfair share of critics. The earliest to complain were photographers who felt that Steichen had submerged individual talent and set back the acceptance of photography as art. Walker Evans, in a pot/kettle pique, complained of its “human familyhood [and] bogus heartfeeling” (Walker Evans, “Robert Frank,” US Camera 1958 (New York: US Camera Publishing Corporation, 1957), 90.).

If Mr. Steichen’s well-intentioned spell doesn’t work, it can only be because he has been so intent on [Mankind’s] physical similarities that…he has utterly forgotten that a family quarrel can be as fierce as any other kind.

Roland Barthes is the most frequently cited early commentator. After seeing the exhibition in Paris in 1956, he declared it to be a product of “classic humanism,” a collection of photographs in which everyone lives and “dies everywhere in the same way.” “[T]o reproduce death or birth tells us, literally, nothing,” (Roland Barthes, “La grande famille des hommes” (“The Great Family of Man”), in Mythologies (Paris: Éditions du Seuil, 1957), 173–76; English translation edition: Roland Barthes, “The Great Family of Man,” Mythologies, translated by Annette Lavers (St Albans, Hertfordshire: Picador, 1976), 100-102.)

Later, Journalist Russell Lynes in 1973 wrote that Family of Man was;

a vast photo-essay, a literary formula basically, with much of the emotional and visual quality provided by sheer bigness of the blow-ups and its rather sententious message sharpened by juxtaposition of opposites — wheat-fields and landscapes of boulders, peasants and patricians, a sort of ‘look at all these nice folks in all these strange places who belong to this family.’ 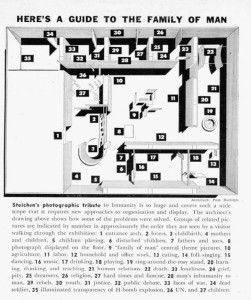 It is quite right that the show was blockbuster in format, scope and distribution. But any examination of the layout will reveal that far from herding its audience through like cattle, the MoMA exhibition, and also its overseas manifestations where space allowed, opened onto internal chambers from where the audience could decide to enter one room or another, following their inclination.

Paul Rudolph’s exhibition design deserved to be imitated, as it was the progeny of a lineage of such shows by Steichen for which he borrowed from Bauhaus design, department store visual merchandising, and advertising. Architect Rudolph has described his design as “telling a story.”

Critics who have attacked the show as a species of American mythology (Roland Barthes), or as an attempt to paper over problems of race and class (Christopher Phillips, John Berger, and Abigail Solomon-Godeau), and even an act of aesthetic colonialism (Allan Sekula) are also justified when one knows that the exhibition was sponsored by the United States Information Agency and the Ford Motor Company. In a letter to Henry Ford II seeking funding, museum director René d’Harnoncourt set Steichen’s new project within a framework out-lined in the Ford Foundation’s annual report of 1950. In a memo proposing the exhibition that would ultimately become The Family of Man, but which was then called Image of America, he conjured an exhibition that would demonstrate America’s economic prowess, social progress, and democratic ideals; it would also make visible its flaws (“The existence of race prejudice and political corruption, for example, will not be denied but will be pre- sented as a challenge in the continuing fight for the fullest realization of American ideals,” wrote d’Harnoncourt. D’Harnoncourt, draft of “Letter to Henry Ford, II,”) 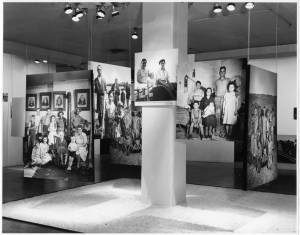 Ezra Stoller, installation view of the exhibition The Family of Man.

Champions of the exhibition take account of the political and cultural context in which the show appeared, including  Eric J. Sandeen in ‘Picturing an Exhibition: “The Family of Man” and 1950s America’ (Albuquerque: University of New Mexico Press, 1995) and Blake Stimson, ‘The Pivot of the World: Photography and Its Nation’ (Cambridge, Mass.: MIT Press, 2006). I take heart at the way Fred Turner in his reforming essay ‘The Family of Man and the Politics of Attention in Cold War America’ (2012) (from which I quote in this post) disposes of several decades’ worth of critical disdain to illuminate what really was a deeply democratic, even utopian, impulse that drove the show and much of the early audience response to it, and an antiauthoritarian politic behind its design and the modes of attention it solicited from visitors.

I reflect on Steichen’s own declaration:

“Although I had presented war in all its grimness in three exhibitions, I had failed to accomplish my mission. I had not incited people into taking open and united action against war itself. . . . What was wrong? I came to the conclusion that I had been working from a negative approach, that what was needed was a positive statement on what a wonderful thing life was, how marvelous people were, and, above all, how alike people were in all parts of the world.”

In preparing the show, Steichen reached out to friends such as Dorothea Lange, and they in turn promoted the project among their colleagues. In her 1953 recruiting letter headlined “A Summons to Photographers All Over the World,” for instance, Lange told her peers that the exhibition would:

show Man to Man across the world. Here we hope to reveal by visual images Man’s dreams and aspirations, his strength, his despair under evil. If photography can bring these things to life, this exhibition will be created in a spirit of passionate and devoted faith in Man. Nothing short of that will do.

In a draft of this letter, Lange listed thirty-three terms that she thought might inspire her colleagues. They still serve as a convenient map of the conceptual field within which she and Steichen were working:

NOTE: Much of the text for this post is an edited version of contributions I have made to the Wikipedia entry on “The Family of Man” exhibition.

Where literature and art intersect, with an emphasis on W.G. Sebald and literature with embedded photographs

How to see without a camera

A camera is an instrument that teaches people how to see without a camera.

Trying to live a creative life

the art of Penguin book covers

Educational and other resources for guides

A site about art and art history in Adelaide

A Project Blog by Mayu Kanamori

Whats the difference between a camera and a sock?

amyorangejuice art glass
The Bowden Archive and Other Marginalia